The German North Sea coast not only hosts fish, it also offers a nice environment for extraordinary pigeons delivering extraordinary results:
Dirk de Beer is now playing team Dirk de Beer & Simone Müller. He’s no stranger to us due to outstanding successes, not just with his own loft. W. Roeper, to name just one example, is successfully playing with the De Beer dynasty, even earning Olympic honours.
Quote De Beer: “Nearly all of my successful pigeons are grandchildren to the “GUS” and the “346” of Guenter Prange; further, you can find the daughter “KLEINE DIRK“ NL-02-2373105 in all descendants of these pigeons.”

In making my selection, I’ve focused on these 3 pigeons, from which I am now going to introduce to you some specimens:

1. “SPECIAL EDITION“
This female pigeon comes from “346” x “105”, daughter „KLEINE DIRK“, hence a daughter to De Beer’s stock pair. Guenther Prange’s “346” continues the bloodline of both the “RINGLOSE” and the “VOORUIT” of Louis Deleus (Schellens). He flew 3x1st prizes and ranked 23rd among the ACE birds of the German association. Two of his brothers are the “1001” and the “1002”. 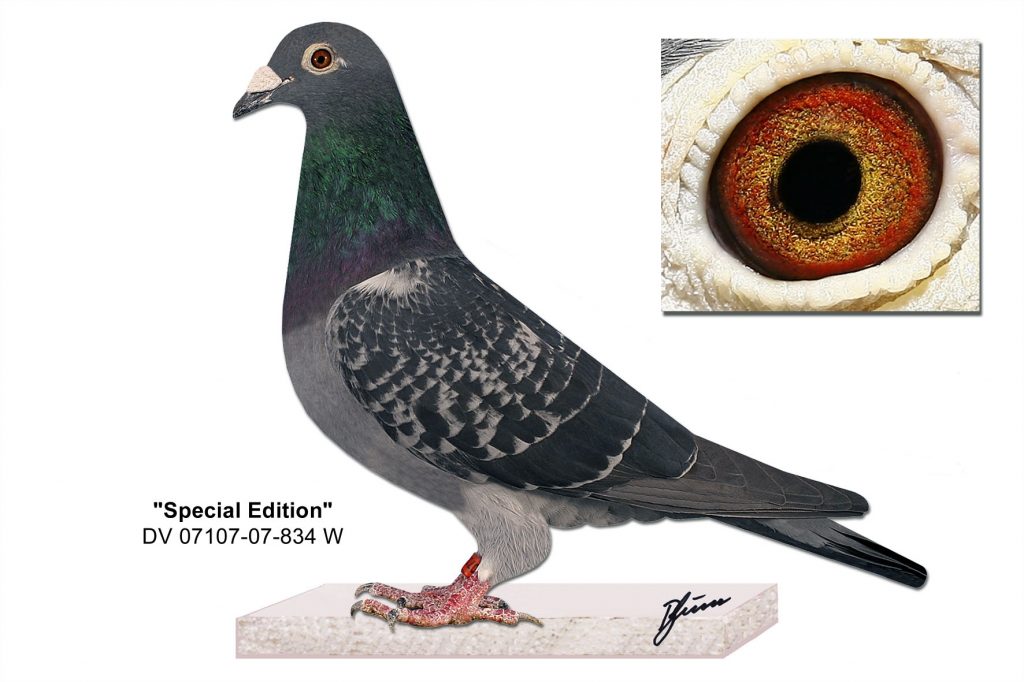 2. “GRANDE DAME“
She is offspring to “105”, daughter “KLEINE DIRK”, and the stock pigeon “GUS”.
This tremendous bird of August (Gus) Jansen is none other than the full brother to “OLYMPIADE 03”, world famous through joint breeding with Leo Heremans. By the way, a full sister of the “GRAND DAME”, the “458”, became the mother to the “OLYMPIC 147”, reaping 5 (five) 1st prizes in a single year. An absolute cornerstone in contemporary pigeon breeding! 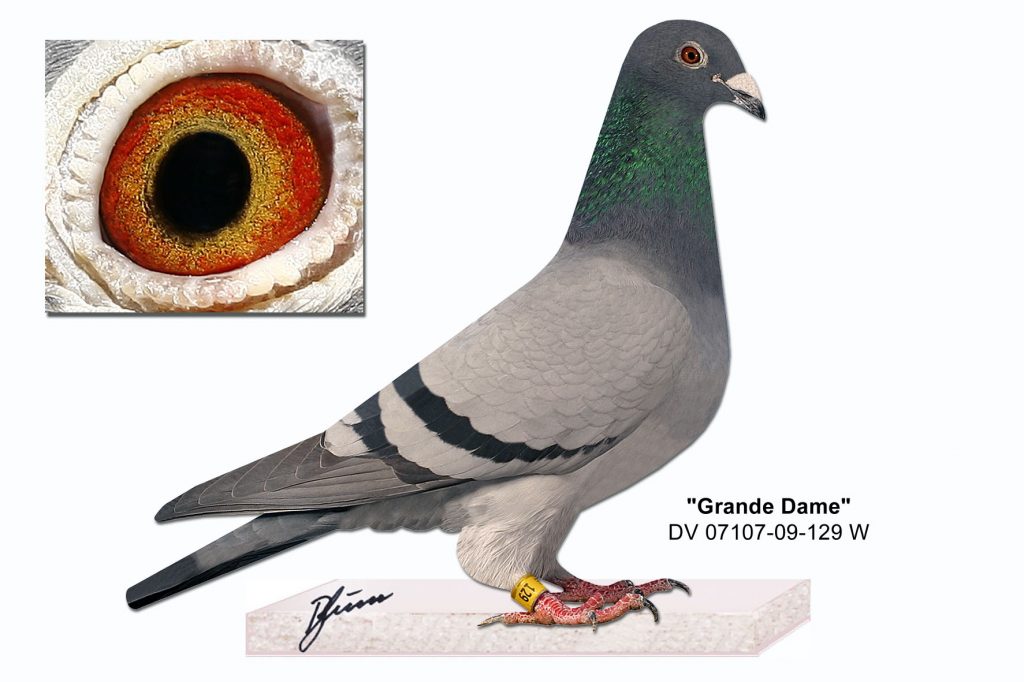 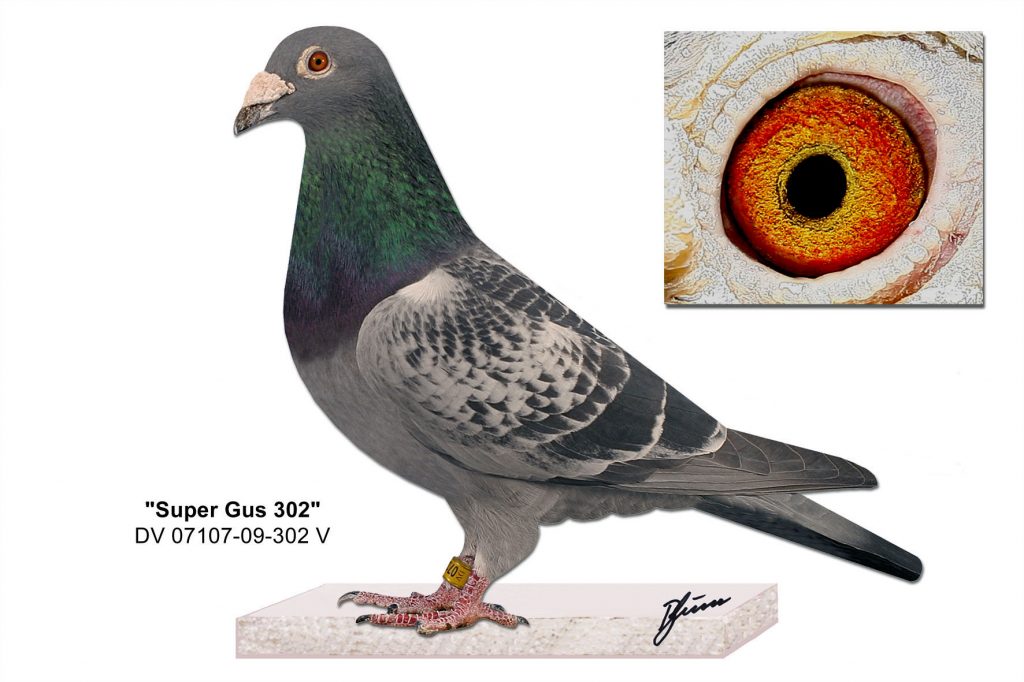 It is becoming apparent that Dirk de Beer is successfully pairing the daughters “GUS” x “105” with the “346” and the daughters of his root pair “346” x “105” with his “GUS”. A formula for success – also for future generations, as proven multiple times… 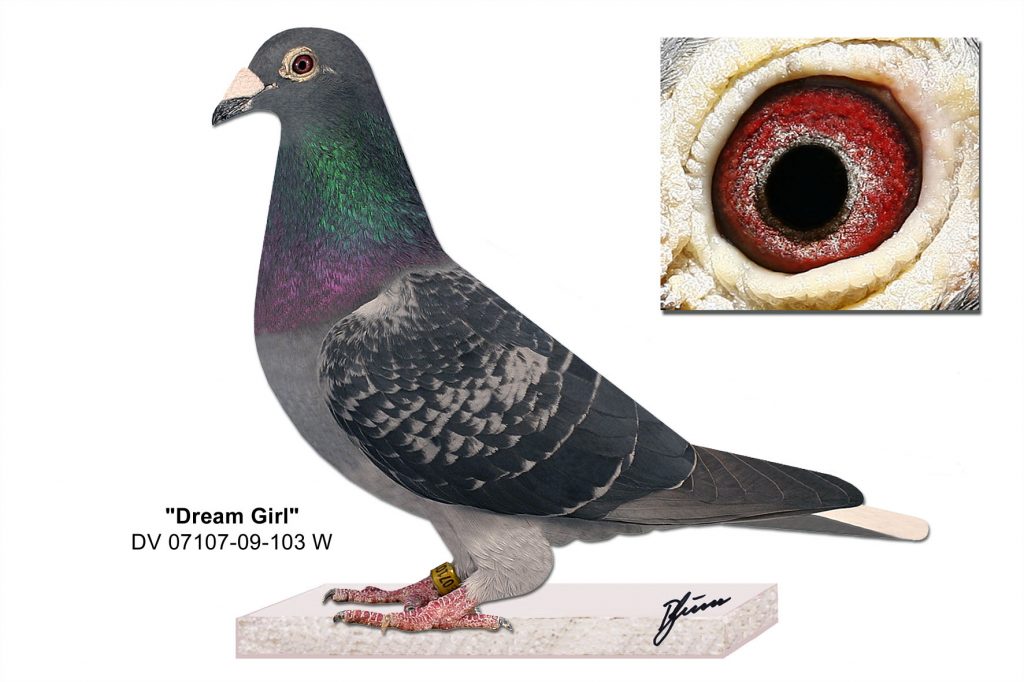 Dirk de Beer has herewith reached the highest peaks in pigeon sport: 2015, winner of the GOUDEN DUIF. Alongside long runner Guenther Prange (again in 2017!), C. & G. Koopman, Wolfgang Roeper, Dirk van Dijck and Jan Keen should also be mentioned when talking about this category of the European elite. It is pure fun enhancing your breed with such successful pedigree.

It took some time and it also wasn’t easy to acquire these pigeons, but eventually these pigeons have been paired with the Silverwings base. Everyone aware of how my pedigree is built (click on “Breed” for more information) will be highly anticipating the fruits…

I remain with a hearty
good flight!
Eugen Schnarr